When Jenna gave birth to her second child, Charlotte, in September 2014 at Lowell General Hospital, “everything seemed fine,” she explained. However, Jenna discovered that Charlotte had difficulty feeding once they were home. Charlotte would cough and choke while drinking milk, so Jenna wondered if Charlotte was allergic to milk protein. Her pediatrician didn’t know what the problem was and referred them to an ear, nose, and throat doctor (ENT).

The ENT told Jenna that Charlotte would grow out of it. However, Charlotte still couldn’t eat when she was six weeks old, and when Jenna fed her, it looked like she was aspirating her milk and choking on it. Jenna took Charlotte back to the ENT to meet with a feeding specialist. Unable to eat and without a diagnosis, Charlotte was sent to Boston Children’s Hospital; Charlotte was put on a feeding tube and examined for her heart murmur. Ultimately, Charlotte was strong enough to be sent home with the feeding tube, but the family still didn’t have any answers as to why Charlotte couldn’t drink her milk like other children. At this point, a doctor noticed that Charlotte’s ears were a little lower and her eyes a little further apart than the average person’s, and so a genetic disorder was suspected.

Jenna took Charlotte to Boston Children’s Hospital, where they met with Dr. Catherine Nowak, a geneticist focused on rare diseases in children and Clinical Director of The Feingold Center for Children. Dr. Nowak did both a physical exam and a Microarray Analysis Test, a laboratory test used to detect thousands of gene regions simultaneously. This test is often the first used to screen for a genetic disorder.

Experience Required To Find A Diagnosis

Even though Charlotte’s test results came back normal, Jenna and Dr. Nowak knew something wasn’t right with Charlotte. The challenge was to figure out what was amiss. Jenna felt that doing different genetic tests for rare diseases one at a time was like looking for a needle in a haystack. However, Dr. Nowak’s experience enabled her to recognize some slight physical differences that could be easily missed, and she suspected that Charlotte might have Noonan Syndrome.

Jenna was nervous that the diagnostic process would be long and difficult. Eight weeks later, Dr. Nowak called Jenna with the test results and asked that Jenna and Charlotte return to her office. Jenna was “so grateful because Dr. Nowak knew what to test for, …and that her experience with rare diseases enabled her to get a diagnosis quickly.” With the diagnosis of Noonan Syndrome caused by a PTPN11 gene mutation, Jenna explained the relief she felt because “at least we knew what we were dealing with.” 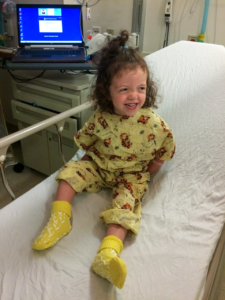 Jenna explained that Dr. Nowak and Jenny Lauck, the Center’s Care Coordinator, were incredibly supportive and responsive during the early days. They took care of everything and always got back to her immediately. Jenna said it was like being on a ship where she didn’t have to worry about anything. Dr. Nowak and Jenny “steered the ship… I didn’t need to figure it out on my own as I knew they’d tell me.” Jenna said she “wasn’t treated like a number, but rather a person.”

When Jenna became pregnant with her third child, she was very nervous that her child might have a similar genetic condition. She and her husband were tested. They discovered that Charlotte’s genetic mutation is de novo – a variation present for the first time and not a result of being genetically passed down. Thankfully, their second daughter, Maren, was born without issue. Dr. Nowak and Jenny were incredibly supportive of Jenna during her pregnancy because Jenna remained nervous about the health of her unborn child. 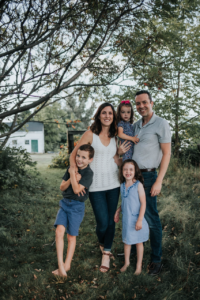 Charlotte continues to see Dr. Nowak every other year. She also works with a speech therapist because Noonan Syndrome can alter development in various body parts, particularly facial characteristics, and the heart.

With the diagnosis of Noonan Syndrome and ongoing, coordinated care from Dr. Nowak and her team, Charlotte lives the typical life of a seven-year-old. She loves to play soccer, do arts and crafts, and is also a Girl Scout.

Since 1982, The Genesis Foundation for Children’s mission to provide wraparound care for children born with rare diseases and genetic disorders has not wavered. In addition to funding The Feingold Center located at Boston Children’s Hospital, we also fund programs and services that support the entire family.