Did You Know That 300 Million People Live With A Rare Disease? 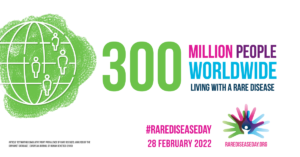 February 28th is Rare Disease Day. “In the United States, a rare disease is defined as a condition that affects fewer than 2,000 people [living] in the U.S. Congress created this definition in the Orphan Drug Act of 1983. Rare diseases became known as orphan diseases because drug companies were not interested in adopting them to develop treatments. The Orphan Drug Act created financial incentives to encourage companies to develop new drugs for rare diseases. The rare disease definition was needed to establish which conditions would qualify for the new incentive programs.”1

There Are 7,000 Identified Rare Diseases

Worldwide, rare diseases currently affect 5% of the population. There are as many as 7,000 identified rare diseases, and 72% of them are genetic. Others are the result of infections (bacterial or viral), allergies, environmental causes, or are rare cancers. 2

The Genesis Foundation for Children helps provide equity for children and families living with rare diseases by funding The Feingold Center for Children other programs and services. For 40 years, we have been providing care to people living with rare and genetic diseases to ensure that they receive the wraparound care they need to thrive.