Your Daughter Will Never Walk or Talk.

Defying the odds, Amy never thought she’d be able to have children. Her pregnancy was high-risk  due to her own medical issues. However, she made it through the first trimester of her pregnancy and was ready for an ultrasound at 18 weeks. Amy didn’t expect the doctors at her local hospital to tell her that her daughter would never walk or talk. From the ultrasound, the doctors explained that her daughter would have extra fingers and toes and enlarged ventricles in her brain. Amy said, “this was my miracle child. I chose to keep the baby, knowing that I’d have to figure everything out every step of the way.” 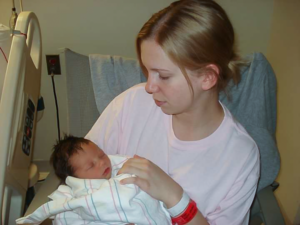 Fifteen days after Jordynn’s birth, Amy took her daughter to see Dr. Catherine Nowak a geneticist and the clinical director at The Feingold Center for Children, located at Boston Children’s Hospital and funded by The Genesis Foundation for Children. Amy, who had also been born with extra fingers and toes (known as polydactyly) and other medical issues, saw Dr. Nowak as a teenager because her pediatrician suspected that her problems might be due to a rare genetic disease. At that time, Amy’s genetic test results were normal because “we didn’t have the ability to test for the thousands of genes as we can today,” explained Dr. Nowak. Now age 22, Dr. Nowak suggested testing both Amy, then 22, and her 15-day old daughter.

I Had Spent 22 Years Not Knowing What Was Wrong With Me.

“After 22 years of not knowing what was wrong with me, I was relieved to discover why I was different from everyone else. I learned that my daughter and I are a rare mother-daughter duo with Greig Cephalopolysyndactyly Syndrome.”

Greig Syndrome is caused by a mutation in the GLI3 gene, which is involved in the normal shaping of many tissues and organs during the early stages of fetal development. “The GLI3 protein can either turn on (activate) or turn off (repress) other genes,” causing secondary medical conditions. Source: https://medlineplus.gov/genetics/gene/gli3/

Greig Cephalopolysyndactyly Syndrome affects the development of the limbs, head, and face. It also can cause seizures, delayed development, and intellectual disability. Now that Amy knew what she and Jordynn were dealing with, she felt that with Dr. Nowak’s guidance, she would be able to get Jordynn the necessary medical care and support so Jordynn wouldn’t just survive. She would thrive. 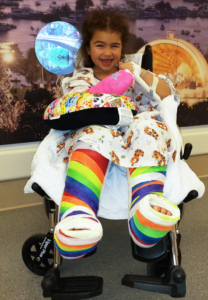 At 11 years old, Jordynn has had 36 different surgeries. The first surgery was on Jordynn’s hands when she was four months old. At age six, Jordynn had her most extensive group of surgeries in a two-month timeframe which included a bone graft in a finger, bilaterally lengthening her Achilles tendons and surgeries on the tendons in her toes. Afterward, she spent eight months in a wheelchair before Jordynn could relearn how to walk again. She then had to wear Ankle Foot Orthosis (AFO) braces for the next 18 months, followed by bilateral knee braces. When Jordynn was done with the AFO braces, she put them under the Christmas tree so Santa could give them to another child in need.

Jordynn spent countless hours in physical, occupational, and swim therapy, along with Amy’s work with her at home in between. Amy and Jordynn know that Jordynn will need more surgeries throughout her life.

Not Just A Rare Disease, But Also A Rare Spirit 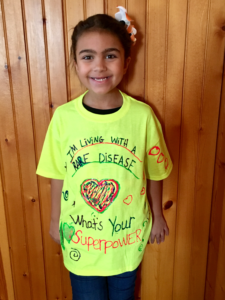 When Amy speaks of the complications from the rare disease, Greig Cephalopolysyndactyly Syndrome, what stands out as especially rare is both Amy and Jordynn’s fighting and joyous spirits to shine their light and love on everyone around them.

Jordynn attends the public middle school near her home and has made high honors. She enjoys dancing, being outside in nature, riding her bike, playing snare and bass in her middle school band, drawing and painting, and playing with Sarge, her German Shepherd puppy. Amy remembers when the doctor told her that her child would never walk or talk. She laughingly exclaims, “if they could see Jordynn now, she doesn’t stop talking and has become so sassy.”

Amy is grateful for Dr. Nowak, The Genesis Foundation for Children, and The Feingold Center for Children because their constant support and compassion have made all of this possible. Amy’s wish for Jordynn is that her “warrior spirit will guide her through life’s obstacles and that Jordynn’s big beautiful smile will continue to light up the world for everyone around her.”

Your donation to the Genesis Foundation for Children can help The Feingold Center for Children treat and support more children living with a rare and genetic disease. Please make a gift today so that we can help more children reach their full potential.